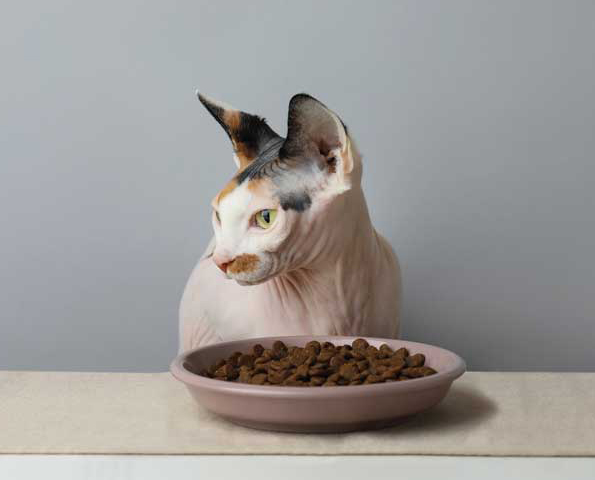 One of the most enduring controversies in veterinary nutrition during my 20 years in practice has been the question of the health impacts of dietary carbohydrates in cats. It is not surprising, of course, that proponents of raw foods and other alternative feeding practices, and critics of conventional pet foods, are suspicious of the health effects of these foods, and that this would make them sympathetic to the claims carbohydrates in these diets might be unhealthy for cats.

It seems, however, to have become conventional wisdom in the mainstream veterinary community that ‘carbs are bad for cats,’ and many vets believe commercial diets, especially kibble, have very high carbohydrate levels, which increase the risk of obesity and diabetes.

This belief leads to specific recommendations to cat owners, such as feeding canned food rather than kibble, feeding ‘low-carb’ diets, or avoiding conventional commercial foods altogether. The risks and benefits of these recommendations are clearly related to the accuracy of the underlying beliefs, so it is worth examining the evidence behind these.

There have been several influential review articles addressing the subject of dietary carbohydrates in cats, and these have alternately proposed and critiqued certain core claims.1-4  These include:

To begin with, there is widespread agreement that feral cats typically eat a diet higher in protein and lower in carbohydrates than most commercial cat foods. Cats also have no ability to taste sweetness, and they appear to choose diets lower in carbohydrates, and higher in fat and protein when given options in laboratory experiments. This is not always the case; it depends a bit on how the diets are formulated and how palatability is manipulated.2,4

However, despite this natural history and apparent innate preference, we must beware of the appeal-to-nature fallacy. This is the false idea that whatever is natural is optimal, beneficial, or benign.

Animals need nutrients more than specific ingredients in their diets, and they can often get the needed nutrients from a variety of sources. If this flexibility were not present, most animals would be at great risk of malnutrition when the very specific diet they have adapted to is not available. Cats are more specialized feeders in the wild than many other mammals, but they are not rigidly dependent on only one narrow set of ingredients in their diet.

It is also correct to say cats, like most mammals, have no requirement for dietary carbohydrates. They do require glucose as an energy source in many tissues, but they are able to produce this from proteins through gluconeogenesis in the liver, and so with adequate protein they can meet their energy needs without any dietary carbohydrates. This does not imply, however, they cannot utilize carbohydrates in the diet.1,2,4

It is commonly claimed, because cats are adapted to a low-carb diet and may prefer this when given the choice, they are unable to use carbohydrates as energy source. This is unequivocally false. Cats do have lower activity of some mechanisms for digesting some carbohydrates, such as a lack of salivary amylase. However, multiple studies have shown they can digest carbs with high efficiency, often up to 90 to 100 per cent, and this is equivalent to the capacity of dogs and many other mammals.2

The more important issue is whether there are negative health effects to such carbohydrate levels. This turns out to be a very complicated question to answer. Carbohydrates are digestible and usable as an energy source for cats, and they are certainly not ‘toxic,’ as is sometimes claimed. However, obesity and the often-related condition of diabetes mellitus are common in cats, and it is a fair question to ask whether dietary carbohydrates may play a role in the development of these.

Regarding obesity, there is no question that excess calorie consumption is the primary culprit.

Carbohydrates may play a role here in some cases, such as the common practice of ad libitum feeding of dry kibble, which necessarily contains starch as a structural ingredient. However, macronutrient content is a zero-sum game, and lower carbohydrate diets inevitably must contain more protein and/or more fat.

It turns out many are higher in fat than diets with more carbs, and consequently, higher in calories. It is also the case that because cats prefer lower carbohydrate diets, at least in some studies, they may actually eat more of a low-carb diet. These two issues lead to greater calorie consumption and higher risk of obesity in some cats when fed lower-carbohydrate diets.2,4,5

Studies on different diets, including dry versus canned and diets with varying macronutrient content, are mixed and do not show a consistent pattern suggesting dietary carbohydrates are an important risk factor for obesity.2 The bottom line is calories matter more in the development of obesity than the source of those calories, and feeding a low-carbohydrate diet without calorie restriction is unlikely to be helpful in reducing the risk of obesity.

It is often claimed the carbohydrates in commercial cat foods increase the risk of diabetes not only by encouraging obesity, but also by causing spikes in blood sugar and insulin levels.

The research data, however, do not support this claim. It is possible to cause increased blood glucose in cats by feeding exceptionally high carbohydrate levels, typically over 50 per cent metabolizable energy as starch or simple sugars, but this does not represent the types or amounts of carbohydrates actually present in commercial cat foods.5

The research literature is mixed, and the variability on the diets tested make comparisons and definitive conclusions challenging.

While some studies, for example, have suggested dry foods are associated with greater risk of diabetes, others have found no impact or even a protective effect. There is no pattern suggesting diet form or carbohydrate level per se in typical commercial diets are important risk factors for developing diabetes.2

There is some evidence lower-carbohydrate diets may help in treating diabetes and may be associated with higher remission rates. However, this evidence has some significant limitations, and, again, low-carb diets can actually be detrimental to health and managing diabetes if they are higher in fat and calories and encourage obesity.

It is reasonable to feed diabetic cats a diet with less than about 25 per cent metabolizable energy as carbohydrates, preferably with protein, rather than fat, replacing the carbohydrates.4

Lower-carbohydrate diets may be useful in some circumstances, such as in managing diabetes, but they can also be harmful if they are higher in fat and calories and encourage obesity. While further research is certainly warranted, abandoning conventional diets, which have significant evidence to support their nutritional and health value, in favour of less thoroughly evaluated alternatives based on theoretical reasoning about what is ‘natural’ for cats is not a good strategy for optimizing the health of our feline friends.

Brennen McKenzie, MA, MSc., VMD, cVMA, discovered evidence-based veterinary medicine after attending the University of Pennsylvania School of Veterinary Medicine and working as a small animal general practice veterinarian. He has served as president of the Evidence-Based Veterinary Medicine Association and reaches out to the public through his SkeptVet blog, the Science-Based Medicine blog, and more. He is certified in medical acupuncture for veterinarians. Columnists’ opinions do not necessarily reflect those of Veterinary Practice News Canada.

5 Laflame D. Cats and Carbohydrates: Why is this Still Controversial? In: Proceedings of the 2018 ACVIM Forum. Seattle, WA; 2018.