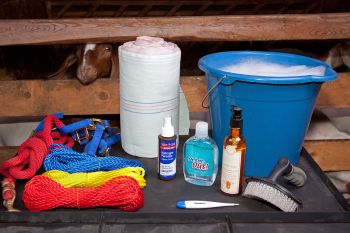 Though study results vary, researchers looking into methicillin-resistant staphylococcus aureus (MRSA) in human and animal medicine say the incidence of colonization is high. Veterinary researchers postulate that animals can be carriers of the bacteria and transfer it to humans, but it is much more likely for the animal to become colonized by a human carrier than the latter.

Scientists report that every bacterium has resistance capabilities and that determining which animal a resistant strain will show up in is impossible. Statistics are lacking, and there’s not a specific region, breed or healthy person known to be more affected than another. This lack of information calls for vigilance from the veterinary industry, as it has become a target when looking to pin blame on why antibiotic resistance is occurring.

“The American Veterinary Medical Association created the judicious use guidelines, in part to ensure current and future availability of veterinary antimicrobials,” says Christine Hoang, DVM, MPH, assistant director in the Scientific Activities Division of the AVMA. “We are bringing veterinary expertise to the table in the antimicrobial discussion for the benefit of people and animals.”

Veterinarians in small-animal practices should keep up with federal discussions regarding the therapeutic use of antimicrobials in food animals, because experts say decisions in one area of veterinary medicine can affect the rest regardless of any perceived transmission methods.

“MRSA is not a dog or a cat issue,” says Leah A. Cohn, DVM, Ph.D., Dipl. ACVIM, of the University of Missouri. “If they have it, they got it from a person. The last thing veterinarians want clients to do is ostracize their pet because they’re afraid they’ll get MRSA from it.”

In early 2010, veterinarians from the University of Missouri published results from their MRSA research that included recruiting 750 pet owners and testing the pet and owner for MRSA colonization.

“Our hypothesis was that pet owners who worked in a hospital or veterinary practice would have a higher incidence of MRSA, but contrary to our hypothesis, there was no distinguishable difference in frequency,” Dr. Cohn says. “We found that it was rare that the owner and pet shared the same strain of bacteria. In fact, there were fewer than five cases.”

Researchers excluded from the study any owner or pet using antibiotics and used individuals who appeared healthy. Owners and pets were recruited from within the university and at local events.

“About 30 percent of people are colonized with staphylococcal bacteria and 5 percent are MRSA colonized,” Cohn says. “We can’t put a number on how much these percentages fluctuate. We can just say they are getting higher.”

Perhaps the easiest and least expensive way to minimize the spread of MRSA within a veterinary facility is to practice good hygiene.

“I can say with absolute certainty that people don’t always wash their hands between patients,” Cohn says. “It’s a habit that needs to be developed. There’s a difference between knowing intellectually when you should wash your hands and actually doing it on a regular basis.”

Cohn says veterinarians and their staff members need to use common sense with every patient, but extra precautions are necessary when handling a suspected MRSA infected animal or one known to be colonized.

“Use a barrier when handling the animal,” Cohn says. “Don’t let the animal contaminate the environment. Keep it in one area and in the same cage. Staff exposure should be limited, and only allow designated staffers to handle the animal. Get rid of organic material outside of the practice, not in a general trash area, and always disinfect everything.”

“There needs to be more thought about prudent use, more objective information about what constitutes proper use,” says J. Scott Weese, DVM, DVSc, Dipl. ACVIM, of Ontario Veterinary College at the University of Guelph. “For example, there is rarely good data about how long to treat infections, and if you compare standard practices in human and vet med, we tend to treat similar conditions for much longer periods of time.”

“The guidelines include advice on using a narrow spectrum antibiotic first and efficacious use of antibiotics in general,” Hoang says. “We tell veterinarians they should work with those responsible for the care of animals to use antimicrobials judiciously. This is part of the veterinarian/client/patient relationship that we promote, which is comprised of three factors.”

“Veterinarians should maintain accurate records of treatment and outcome should be used to evaluate therapeutic regimens,” Hoang says. “By doing this, the veterinarian takes into account development of resistance or cross-resistance to antimicrobials.”

You May Also Like  The tuition-debt crisis: Who is willing to change?

Pfizer offers owner information sheets for veterinarians to distribute and also online,” Wallace says. “These sheets tell owners about the drug and what can be expected from it, including possible side effects.

Companies that offer veterinary continuing education help monitor the effectiveness of their antibiotics by gaining feedback from the participants and answering questions.

Veterinarians may consider using an alternative treatment to an antibiotic in certain cases, experts say. This route is supported by the AVMA and is practiced daily by holistic veterinarians.

“There are various compounds that have effects against MRSA,” Dr. Weese says. “Some can be considered holistic. Evidence supporting their use is weak, and just because something is holistic, it’s not necessarily safe. For example, tea tree oil can kill bacteria quite effectively, but it can also damage the skin. We don’t know how, if, when to use it for superficial MRSA infections. It might be a useful adjunctive treatment, but we don’t have the evidence yet.”

Since the industry largely practices evidence-based medicine, Weese points to options that are tried and true aside from antibiotics.

“There are various non-antimicrobial approaches that can help reduce antibiotic use. This includes the use of topical biocides [antiseptics] for some infections, adjunctive therapies like honey for superficial infections, perhaps bacteriophages in the future and in general, good preventive medicine strategies.”

MRSA isn’t the only bacteria that can be difficult to treat with antibiotics.

“We are seeing Escherichia coli (E. coli) and salmonella with greater frequency,” Cohn says. “Any bacteria has the potential to be resistant to antibiotics, which is why hygiene and antimicrobial use needs to be taken seriously now.”

Experts say veterinarians should increase the frequency in which they send samples to diagnostic laboratories for testing. Once an animal isn’t showing improvement from physical symptoms after using the prescribed antibiotic, a sample should be tested to see what bacteria is affecting the patient.

“There is lag time between when the animal was at the clinic and when the diagnosis is made,” says Susan Sanchez, Ph.D., MIBiol, CBiol, of the University of Georgia College of Veterinary Medicine. “There is a concern when the patient passes the point that would be best to send out a sample for treatment. When testing is delayed, not only is the animal not getting better, but it is shedding potentially harmful bacteria wherever it goes.”

Dr. Sanchez’s research includes antimicrobial resistance and spread in animals and people. She says infection progression is a more serious problem than many veterinary practices recognize.

“Veterinarians need to educate the owner on the importance of giving the full regimen if antibiotics and giving it properly,” Sanchez says. “When an owner has to chase down their pet and hold it in a towel to give it medicine and the whole process is a struggle, they’re going to stop giving the medication when the animal seems to feel better. This means the bacteria has an opportunity to build a resistance and also delays a true recovery for the pet.”

Sanchez says veterinarians need to be more considerate of the way they prescribe the antibiotic to be administered, saying in some cases that the animal may benefit most by a two-week duration injectable antibiotic instead of an oral medication.

“Another area I’d caution veterinarians in is to not always reach for the stronger, broad spectrum antibiotic,” Sanchez says. “Even in human medicine, ailments are expected to be a fast fix, so the antibiotic thought to eliminate the problem quickest is used. This practice aids in resistance.”

While treatment of MRSA can be a lengthy process, experts say, identifying the bacteria culprit is the first important step in helping the animal recovery.

“We need to use antibiotics that can effectively kill MRSA and use them properly,” Weese says. “We want to avoid using drugs that are used as a last resort in people with serious MRSA infections so that we don’t contribute to resistance to these drugs. Just because a S. aureus isolate is resistant to methicillin, it doesn’t make it any harder to kill, as long as a proper drug is used.”

Veterinarians may have access to drugs reserved for human use, but some will never use those drugs while others use them only as a last resort to save a patient’s life.

“Vancomycin is used in humans to treat MRSA,” Cohn says. “Veterinarians avoid using this to prevent resistance, but it is available and legal for them to use. I think it will become harder and harder to find effective antibiotics.”

While none of the experts are concerned that antibiotic resistance today means total resistance is inevitable, they agree that doctors in veterinary and human medicine need to curb antibiotic use.

“Bacteria is constantly changing and they kill each other competing for nutrients,” Sanchez says. “They’re going to continue doing this and we need to be smarter and keep doing our thing to battle them. It is important to keep this discussion in the public’s eye so they think about what they are doing not only when they are using antibiotics but on a daily basis.”