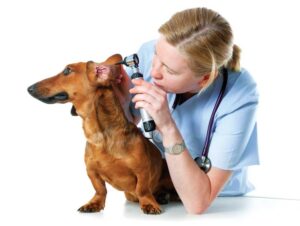 Ears. They’re the bane of veterinarians and clients alike, not to mention the dogs and cats who must contend with itchy or painful ear conditions caused by environmental and food allergies, bacteria and yeast overgrowth, mites, foreign bodies, trauma, tumours, or polyps.

Ear problems can spring from many different sources. That makes it essential to conduct a thorough exam, be familiar with some of the other disorders that can lead to ear problems, and know what to ask owners to bring out clues to the cause.

Allergies are probably the number one cause of ear inflammation. Once ears become inflamed, secondary infections caused by overgrowth of normal populations of bacteria or yeast in the ear typically follow. The result is exudate, pain, and worsening inflammation.

Young animals in multi-pet households or hoarding situations may pass ear mites (Otodectes cynotis) back and forth, especially if they aren’t on a monthly preventative, are fed a poor diet, or are sick. Demodex canis is another mite that can affect young or old animals who are immune-suppressed.

“Those dogs commonly will have changes in normal skin cell turnover,” says Amelia White, DVM, DACVD, assistant clinical professor of dermatology at Auburn University College of Veterinary Medicine. “Because the ears are kind of an extension of the skin, it makes sense you can get changes in the bacterial and yeast populations. The ceruminous glands within the ear become plumper and make too much wax when you have an endocrine disorder like hypothyroidism. Then the immune system can become suppressed and there is loss of control over normal bacterial and yeast populations. This can lead to an ear infection.”

Autoimmune conditions that can affect the ear include pemphigus foliaceus (PF), cutaneous lupus, and sebaceous adenitis. Pemphigus-type disorders cause pustules that also can resemble blisters. In dogs with sebaceous adenitis—think standard poodle, Akita, Samoyed, Old English sheepdog, vizsla, Havanese, and English springer spaniel—the body’s attack on the sebaceous glands causes scaling of the pinna. These are signs you’re not looking at a standard ear infection caused by allergies.

Observe pets before putting your hands on them, watching for head tilt and head or ear scratching or shaking. Animals with otitis media or interna may exhibit neurological abnormalities, such as ataxia and asymmetrical pupil size. In erect-eared dogs, one of the ears may droop, indicating pain or a nervous system abnormality, or the face itself could droop.

While you’re doing this, ask questions:

A young animal whose problems began in puppyhood and occur intermittently probably has allergies. A young Labrador retriever who hunts frequently could have plant material, a foreign object, or an insect down the ear canal. A middle-aged animal with sudden onset in one ear could have an ear tumour. Response to treatment and types of treatment can indicate whether infection is severe and goes beyond the eardrum or that it could be resistant to standard antimicrobials.

You May Also Like  Caring for the geriatric pet

With cats, find out whether they’ve experienced upper respiratory disease.

“If they have a history of sneezing or nasal discharge, oftentimes they develop a middle-ear infection that then becomes an external ear problem,” says Elizabeth A. Layne, DVM, DACVD, clinical instructor at the University of Wisconsin School of Veterinary Medicine in Madison. “So it’s useful to know if the cat had upper respiratory problems in the past.”

Age is a clue as well. Young cats are more likely to have a benign inflammatory polyp if the problem is only in one ear. In older cats with no previous history of ear problems, sudden onset may indicate more concerning types of masses originating from the skin or a gland within the ear canal.

Many owners notice the ear is stinky or has discharge coming out of it, but may not realize the animal’s lack of appetite is caused by ear pain when opening the jaw.

“Those little bits of information can be very helpful for us to know what is causing the problem,” Dr. White says. “It changes what we might want to do, how aggressive we are with our workups, and how we’re going to treat them.”

Getting a look inside the ear can be difficult if it’s painful. Start slowly and gently for the best chance of looking down the ear with an otoscope. Consider sedating animals that are extremely painful to get the best understanding of their condition.

As you look down the ear canal, check for fluid or exudate, and note the type of exudate. Take samples to look for bacteria, yeast, parasites, and neoplastic cells. The presence of acantholytic keratinocytes can indicate pemphigus. If there is excessive debris in the ear, you may need to clean some of it out to get a good visualization of the entire canal.

Viewing the eardrum can be challenging, too.

“The angle of the tympanic membrane differs between dogs and cats,” says Naomi Kirby Sismour, DVM, technical services manager at PKB Animal Health. “It’s 30 to 45 degrees in dogs and 90 degrees in cats. This natural angle of the eardrum makes it difficult to view at times. Additional factors that can impede visualization of the eardrum include an overgrowth of yeast and bacteria, wax buildup, thick hair in the ear canal, or foreign bodies, such as tumours or polyps.”

When an ear infection has been ongoing, the ear canal may be so swollen that it’s impossible to view.

“In those situations, you might have to treat for a little while and have the owner bring the pet back in a couple of weeks to see if it has opened up enough for you to see down it,” White says. “If you try therapy and it doesn’t work, you’re probably going to have to rely on advanced imaging, such as a CT scan.”

A CT scan also is helpful if you suspect middle ear disease, but don’t see a ruptured or bulging eardrum or fluid behind the eardrum. The procedure takes seconds to perform and requires only light sedation for the patient.

You May Also Like  The hazy predicament of pot for pets

Video otoscopy is another way to visualize what’s going on in the ear with a sedated patient. The instrument can be used to take samples, flush out fluid from behind the eardrum, and remove certain types of masses from the ear canal, such as the inflammatory polyps often seen in cats.

Consider a culture and sensitivity test when current treatments aren’t proving effective. Other reasons to culture include hemorrhage, an ulcerated ear canal, extreme pain, and possible middle-ear involvement based on neurological signs.

“All of those signs would indicate using a systemic antibiotic, too, and in this day and age, it’s wise to know which one is the right one from the beginning,”
Dr. Layne says.

It’s important to get material behind the eardrum. That may require performing a myringotomy, White notes.

If you’re planning to medicate topically, however, a culture is unnecessary. That’s important from an economic standpoint for clients on a budget. When antibiotics are given in the form of a pill or injection, the body breaks the drug down into a much smaller concentration.

“When you place the antibiotic directly into the ear canal, it’s not getting broken down by the body, so you have concentrations of antibiotic that are hundreds to thousands times higher than what you could achieve if you gave that same antibiotic in a pill or shot form,” White says.

To collect samples for cytology and culture, gently swab the sides of the canal and roll the swab onto a glass slide in a thin film, Dr. Sismour says. Air-dry the slide, stain with Diff-Quik, rinse, and air-dry. Samples for culture are obtained the same way, but using a sterile culturette.

Ear disease is a reflection of skin disease, in particular, atopic dermatitis. Allergic skin is often treated with topical steroids in spray or shampoo form to relieve inflammation and prevent infection. Ears need anti-inflammatory treatment, too, rather than multiple doses of antibiotics.

“There’s no anti-inflammatory-only ear product,” Layne says. “They all have an antibiotic or antifungal combination in them. With repeated use of an antibiotic, you worry about triggering resistance. What we need is a steroid-only ear product. We mix one on our own, and I know many dermatologists and veterinarians [do the same], but it would be ideal to have a commercial product with some studies behind it.”

Related issues are adequate volume of medication and duration of treatment. Products may say to use only two or four drops, but that may be insufficient for a dog’s large ear canal.

“I always give clients a syringe with no needle and ask them to put a full milliliter in each ear,” Layne says. “A lot of these products are labelled for seven days of treatment, but that really is just based on their efficacy studies that showed reduction in some of the clinical signs—a lot of them need longer to actually treat the infection. I usually use a higher volume for longer, maybe even two or three weeks. It requires using more medication, but for some of these repeat problems, I think owners are interested in a different approach. If you explain they need to get a lot more of the cream or lotion in there, most of them understand that.”

Recurring ear infections or inflammation can always be traced to a primary disease. Without treating it, the problem recurs.

“Sometimes we make the joke that every dog deserves one skin and ear infection, but once it comes back time after time, you know there’s a stimulus for it,” White says. “We’ve got to get to the bottom of that so we can prevent the inflammation and subsequent infection in the animal’s ear.”