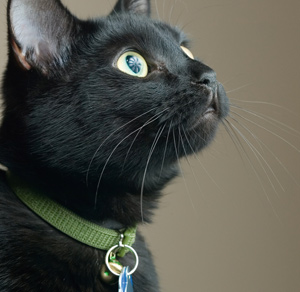 Almost 73 percent of cats wore collars consistently during a six-month study period; statistics that can help veterinarians discuss the importance of pet identification with cat owners, according to The Ohio State University.

Convincing cat owners, even those with indoor-only cats, that their pets need identification is a “tremendous uphill battle,” said Linda Lord, DVM, Ph.D., assistant professor of veterinary preventive medicine at the university and lead author of the study.

“A lot of people start out with the dogma that cats can’t wear collars, that they won’t tolerate them or that they’re dangerous,” Dr. Lord said. “Now pet owners can look at this research and, if they own a cat, maybe they will now consider that they will be able to put identification on them. A collar with an ID tag is probably a cat’s greatest chance of ever being re-homed or brought back if it is lost.”

The researchers recruited 338 cat owners for a total of 538 cats from the college of veterinary medicine at Ohio State, the University of Florida, Texas A&M University and Cornell University. Thirty-two animals were withdrawn from the study for various reasons, leaving 506 cats.

Cats were randomly assigned to wear one of three types of collars: a plastic buckle collar, a buckle collar designed to detach if the cat is caught on something, or an elastic stretch safety collar.

Preparing for the Collar Discussion

Veterinarians, armed with data from this cat collar study, should include during annual feline wellness exams a discussion about the importance of pet identification, according to The Ohio State University.

Discussion pointers, as cited by the researchers:

• Indoor-only cats can get lost.
• To ensure proper fitting, make sure there is room for two fingers between the neck and the collar.
• Owners should carefully observe their cats’ behavior with new collars for the first few days, when problems apparently are more common as the cats adjust.
• For cat owners who are concerned that collars can be dangerous, one argument is that a cat is much more likely to get lost than it is to be injured by a collar.
• Microchipping cats remains a useful backup identification method.

“The return-to-owner rate is abysmal for cats,” said Linda Lord, DVM, Ph.D., assistant professor of veterinary preventive medicine at the university and lead author of the study. “Fewer than 2 percent of lost cats are returned to their owners. If we could get cat owners to try using a collar with identification, it would be a big deal.”

The study found that 391 cats (72.7 percent) wore collars for the entire six-month study period. Owners of the 115 cats that did not successfully wear collars for six months reported the following reasons: the cat lost the collar (7.1 percent); the cat scratched excessively at the collar (4.8 percent); the collar continued to come off and the owner chose not to replace it (3.3 percent); or the collar got stuck in the cat’s mouth or on another object (1.5 percent).

In general, collars with the plastic buckle didn’t come off as much, according to Margaret Slater, DVM, an epidemiologist with the American Society for the Prevention of Cruelty to Animals and co-author of the study.

Dr. Slater noted that the elastic stretch collars sometimes frayed and a couple of the breakaway collars didn’t break away so it’s important to tell owners to check their cats’ collars frequently.

The study also revealed that cats were significantly more likely to fail to wear a collar for six months if their owners did not expect they would accept the collar extremely or moderately well or if the collar came off and the owner had to put it back on more than once.

“Part of the success of a cat wearing a collar is the expectation of the owner,” Lord said. “For some owners, if a collar came off once, they were done. Some put the collar back on their cat five or six times. For the Houdini cat that can constantly get the collar off, it may just not work for them. A cat can also lose a collar, and then an owner has to decide whether to replace it.”

Owners of 90 percent of the cats told researchers they planned to keep collars on their cats after completion of the study. Those who would not continue with the collars attributed their decision to either problems with the collar or the fact that their cats stayed indoors.

Slater encourages veterinarians that already have a dialog with their clients about the importance of collar identification to use this data to reinforce the message.

For those who want to incorporate a conversation, Slater said it’s important to discuss proper fitting, such as making sure there is room for two fingers between the neck and the collar. Owners may also need to try different types of collars before the cat tolerates one, she said.

In addition to collar identification, the researchers pointed out that microchipping is a useful backup. All of the enrolled cats were microchipped for the study.

“Both [collars and microchipping] have their place,” Slater said.

For example, with identification collars, it’s easy for good Samaritans who find a lost cat to return the cat to the proper owner, Slater said.

“The cat can go home without going to the shelter,” she said.

If for some reason a collar falls off and a cat is brought to an animal shelter, the owner can be identified when the shelter scans the cat, Slater added.

Slater said she hopes to work on research expanding this current study’s concept. For instance, studying how cat conformation (slender heads/necks) and/or other types of collars, such as rolled leather, plays a factor in collar acceptance.

She would also like to investigate collar acceptance in kittens. Getting kittens accustomed to collars at an early age may make it easier in the long haul, Slater said.

“Evaluation of collars and microchips for visual and permanent identification of pet cats,” was published in an August issue of the Journal of the American Veterinary Medical Association.

Brenda Griffin, DVM, Dipl. ACVIM, and Julie Levy, DVM, Ph.D., Dipl. ACVIM, both of the University of Florida, were also co-authors of the study.

The study was supported by Schering-Plough HomeAgain LLC, The Humane Society of the United States and the Petco Foundation.

Read the full article in the November issue of Veterinary Practice News. To read the article, readers must be a subscriber. To subscribe, click here.

Cat Channel ran a similar version of this story.

Following are some reader comments from that story:

• “Our cats have always worn collars. Besides all the benefits listed it also helps us hear them.” –Lorraine & Bill of Manhattan, N.Y.
• “I’m still afraid the collar will get caught on something and won’t release, the release is pretty tight.” –Pat of Omaha, Neb.
• “My cats hate their collars and try to rip them off every time they are on.” –Anon of California.
• “My cats have always worn collars. The most important thing is that they are tight enough, but not too tight. If they are not tight enough, they will often get caught in the cat’s mouth. Check frequently to make sure the collar is not getting too tight. My cats are all indoor kitties, but there is always that one time that the repairman comes and leaves the door ajar before you discovered and the kitty slips out the door. This can happen no matter how careful you are.” –Sheryl of Casa Grande, Ariz.