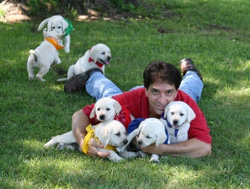 Joseph Demichael, DVM, of Louisville, Ky, has been the veterinarian on call at six trade shows and has never treated a single patient.

WANTED: Veterinarian engaged in small-animal practice. Must love dogs, cats, parrots that talk back and energetic monkeys, and enjoy working and networking in a social setting.

If this sounds beyond the scope of a typical small-animal hospital environment, it is. These days, veterinarians are enjoying getting out of the exam room and being on call at the many pet trade shows that are big business across America.

“Over the years we’ve had a variety of emergency and bizarre incidents,” says Colette Fairchild, trade show manager for H.H Backer Associates Inc., a company that hosts two shows a year in Chicago and Baltimore.

“But the year a dog bit a huge chunk out of another dog and the consequences turned into a verbal and legal debacle, we decided that it would be a good idea to have a veterinarian on call throughout each event who could immediately determine the level of the emergency and suggest further treatment. We also have 24-hour veterinary hospitals in the area on alert to assist should the need arise.

“It turned out to be a very good decision because the first year we had a veterinarian on call, a dog taking part in the grooming competition at the show in Chicago went into respiratory distress,” Fairchild says.

“The trade show veterinarian immediately diagnosed gastric dilation volvulus,  which can be life threatening. On her advice, we loaded the dog and its owner into a golf cart to a waiting taxi headed for an emergency hospital and we were able to save the dog’s life.”

The veterinarian who handled this emergency was Bonnie Valiente DVM, who practices in Philadelphia.

Dr. Valiente has been on call at various H.H Backer shows in Chicago for the past six years. She has also worked at the Luxury Pet Pavilion in Los Angeles and at Pet fashion Week in New York.

As many as 12 000 exhibitors and retailers visit a typical trade show and often there are as many as 400 dogs and other pets present, too.

You May Also Like  Global nutritional group enriched with partnership

“Many of the booths put out treats for both people and pets. I’ve treated a dog that helped itself to a bowl of candy while its owner was engrossed in conversation,” says Valiente.

“This posed a double problem because apart from the toxicity of the chocolate it consumed, I was worried that the wrappers it had also ingested would tear its intestines and suggested that the owner immediately seek further treatment. The same year there was an elderly dog suffering from dehydration after a long car ride to the trade show.”

On her watch, Valiente has also treated two small dogs that fell out of their strollers.

“I did an orthopedic examination on the one. I couldn’t feel a break but the dog was definitely in pain. So I suggested X-rays. In the second incident, the dog was having a seizure. Obviously it's difficult to treat at a show because there’s no proper veterinary facility. But being able to determine the level of the emergency and recommend further action does take care of any problems that arise.”

Fairchild believes it’s important to have a veterinarian on hand just in case he is needed. ”There’s the possibility that someone who comes forward likes animals and wants to help but they aren’t qualified. There’s no time to check credentials in an emergency and if they do the wrong thing, the results could have liability issues. We would rather have a veterinarian around who doesn’t even get a call during the duration of a show.”

And that’s exactly the case with Joseph Demichael, DVM, of Louisville, Ky. Demichael has been the veterinarian on call at six trade shows and has never treated a single patient.

These days, some veterinarians use their medical expertise and background to design innovative products that support the general health of pets or simply tap into current pet-related stationery and fashion trends. Being on call at a trade show is a wonderful opportunity to promote their products and ideas to the industry.

Valiente, who apart from her veterinarian expertise has a background in studio art, designs a range of matching clothing for people and their pets.  Her Little Dog and Cat Clothing Co. designs sell under the label Boutique Fancy Fluff.

Demichael, who breeds Labrador retrievers, has a passion for photography and has combined these loves into a range of greeting cards that he also promotes at the shows he attends.

The pet industry was expected to earn $45 billion in 2009 and the number of pet trade shows held around the country is phenomenal. Veterinarians interested in working a show should find no shortage of opportunities. Calendars of pet industry events appear regularly in publications such as Pet Product News International and Pet Style News. Local chambers of commerce are another good resource to check what happening in a particular area.