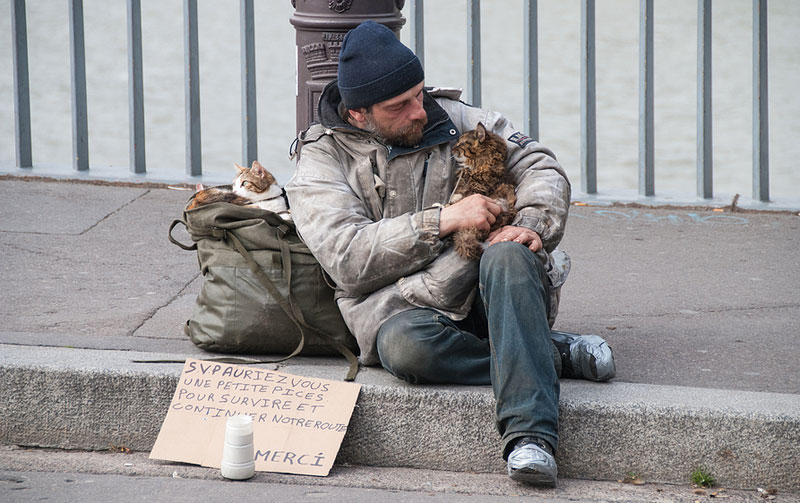 Dogs and cats belonging to Canada’s homeless and vulnerably housed people are just as healthy as other populations of owned pets—and even healthier in some cases.

This is according to a newly published study, conducted jointly by the University of Guelph (U of G), Community Veterinary Outreach (CVO), and the American Society for Prevention of Cruelty to Animals (ASPCA).

Using data collected between April 2018 and March 2020, researchers looked at the health records of 1124 dogs and cats examined by veterinarians at clinics operated by CVO, a non-profit organization, in both Ontario and Manitoba. The data included information on patient history, as well as findings of physical examinations, body condition scores (BCS), and diagnostic and treatment recommendations.

The research, which was led by David Pearl, BSc., MSc., DVM, PhD, an associate professor in U of G’s department of population medicine, revealed the average BCS for examined dogs and cats was 5.4. (A rating of 5 is ideal, U of G says.)

Additionally, while 39 per cent of dogs examined were reported to be overweight, the figure represents less than the prevalence of obesity in most other studies of companion dogs, which is as high as 60 per cent.

“We were looking specifically at body condition scores, a measure of whether the pets are obese or emaciated,” Dr. Pearl says. “Generally, they looked very similar to other pets being seen in private practice. BCS was generally good, emaciation was exceedingly rare, obesity was either the same as pets seen in private practice, or, in the case of dogs, a little bit lower.”

“As the veterinary profession grapples with solutions to addressing barriers to accessible veterinary care and more organizations seek to support humans and animals who are underserved in our communities, this research is a timely reminder that care delivery to this population of pets is not only doable, but worth doing,” she explains.

According to the study, approximately 35,000 people in Canada experience homelessness each night. Of these individuals, between eight and 19 per cent are pet owners.

“We hope our findings dispel some of the misconceptions and myths about pets belonging to vulnerably housed and homeless people, and show that, as pet owners, they are willing and able to provide good care for their pets,” says study co-author Margaret Slater, DVM, PhD, senior director of research with ASPCA. “Veterinarians can consider if they are able to make accommodation for homeless or vulnerably housed clients or support other specially focused programs.”

“We hope this research helps to cultivate empathy, compassion, and support for this population of pet owners among animal health and welfare professionals, as well as the public,” Dr. Lem adds.

The study, which U of G reports is the first in Canada to explore the health status of the animals of those experiencing homelessness and housing vulnerability, has been published in Preventive Veterinary Medicine. To access it, click here.