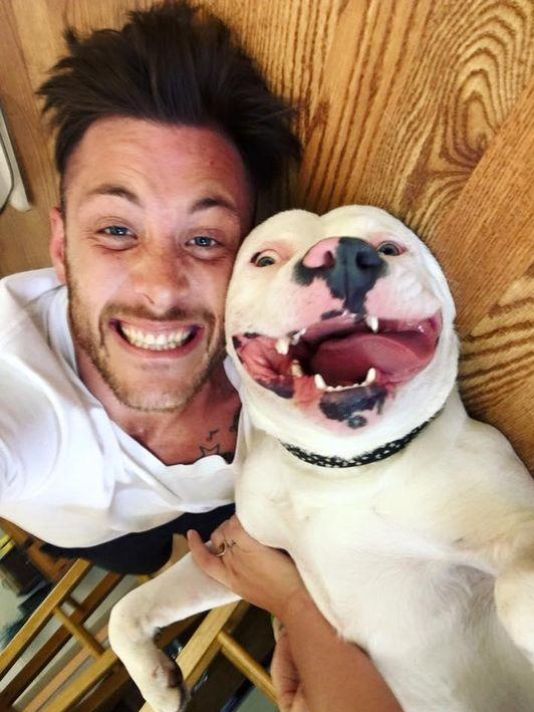 It’s an adoption story that has gone all wrong: After a photo of Diggy (formerly known as Sir Wiggleton), and his new owner, Dan Tillery, went viral, police officers were soon at Tillery’s door, telling him he had to get rid of the dog because he looked like a pit bull.

Tillery lives in Waterford Township, Mich., which has a ban on pit bulls. However, the Detroit Dog Rescue, where Tillery adopted Diggy from, says Diggy is an American Pit Bull.

The dog had previously been listed as an American Bulldog/Pit Bull mix on the Detroit Dog Rescue’s Facebook page, which police cited as their evidence to what breed Diggy was. According to ABC 7 News, the rescue said that was an error, “due to the large number of actual pit bulls and pit bull mixes that they save from possible death at Detroit Animal Control.” When representatives from the rescue went to the Waterford Township Police Station to review Diggy’s case, Tillery was issued a citation for still having Diggy in his home.

Police then said that a veterinarian had to confirm Diggy’s breed. If he was an American Bulldog, he could stay.

As of press time, a Waterford veterinarian has confirmed Diggy is an American Bulldog. But will Diggy get to stay in the city? Only time will tell.

Diggy’s case has prompted calls to end the pit bull ban in the town. According to the Detroit News:

“… after it was learned Diggy might get the ziggy in Waterford Township because of a 1990 township law banning the breed as part of a dangerous dog ordinance, supporters began a petition in support of him and other breeds. More than 53,000 have signed to date, some of them showing up at the board meeting.”

“If Waterford Township wanted to truly impact public safety, they would discard the notion of a breed specific ban and focus on real issues involving companion animals and public safety. Officers should be looking at cases of cruelty and neglect (regardless of the breed). Not only is animal cruelty strongly correlated to acts of violence directed at people, but the animals subjected to long-term abuse or neglect often are not appropriately socialized and may develop behavioral characteristics that make them potentially dangerous. In addition, officers must aggressively enforce existing laws, such as those concerning dogs running at large, for example. The fact that a dog is a pit bull is not a problem; however, a pit bull running loose in the streets is a problem, just as it would be a problem if the dog were a Labrador or a golden retriever. It is the actions of the owner that should be held accountable.

The Michigan Humane Society strongly opposes Waterford Township’s breed specific ordinance. It is ineffective, misguided and serves no true purpose other than to perpetuate myths.”

The Michigan Humane Society stands firmly behind Dan Tillery and Diggy and would condemn any action to remove him from his loving home absent any violations of existing State law governing dangerous animals.