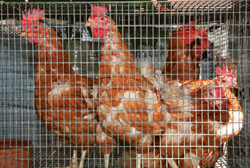 California veterinarians are in conflict with one another again. This time, it’s over Proposition 2, also known as “The Prevention of Farm Animal Cruelty Act.”

Proponents are trying to regulate the housing and care of farm animals, especially egg-laying hens. Other efforts are ongoing to provide more humane husbandry for pigs, veal calves and livestock.

Most of the general population does not even think about the issues involved in intense food animal production. However, when people are asked how they would vote, they want to be kind.

Our profession is being taken to task over this issue because opponents feel that Prop. 2 will force egg production out of California, while proponents feel that eliminating battery cages for egg-laying hens is the right thing to do and that industry can make the adjustment over time.

HSVMA is a well-funded national organization with thousands of members, including the members of the Association of Veterinarians for Animal Rights, who were merged into the group  at its inception under the leadership of Dr. Paula Kizlak, AVAR president, and Wayne Pacelle, president of the Humane Society of the United State, and each organization’s board of directors.

Every veterinarian should review the science that supports the “yes” vote for Prop.2 at the Humane California website.

This report clearly concludes that egg-laying hens kept in tiny battery cages with wire bottoms, no perches and no shavings are deprived of basic freedoms and behaviors such as wing flapping, scratching, nesting, preening, etc.

The commission also found that egg-laying hens kept in battery cages, as a population, have a high rate of osteoporosis (25 percent develop bone fractures when freed) and are stressed and frustrated.

Veterinarians who oppose Prop. 2 have formed the California Veterinary Assn. This group comprises veterinarians involved in the poultry industry and some research and teaching academicians in poultry science.

The CVA contends that the Pew Commission is biased. CVA members are concerned that the proposed expanded housing for egg-laying hens will open the door to more diseases (especially coccidia) and trauma, and increased exposure to viruses and epidemics such as avian flu. Members predict that the overall costs and losses incurred for new housing would force many egg producers out of the market, resulting in 5,000 to 7,000 lost jobs.

The CVA predicts that if the measure is approved, the cost of eggs will rise significantly and Californians will have to depend on eggs from Mexico, where disease control is less stringent.

The urban shopper knows very little about the processes by which their eggs, milk products and meat are produced.

Some might occasionally think of the chicken yard and the chicken coup and conjure up images from old movies and old TV shows like “Lassie.”

But for most people, eggs, meat and cheese appear on the shelf at the market for a certain price and that’s all there is to it.

Society is becoming more inclined toward kindness to animals. A growing number of people have decided not to eat red meat for health purposes, preferring chicken and fish. Many have  become vegetarians.

By virtue of the core curriculum in our veterinary schools, we are all “aggies” and we know the process of food animal production. Still, this common aggie thread is not enough to keep our thinking in unison as a profession on issues like Prop. 2.

Veterinarians in California now have two new associations in direct conflict with one another.

Which do we support? How do we come to an agreement when both sides quote their science and their viewpoints as being right? Will there be winners and losers with every bit of legislation that comes along? Will colleagues who work with farm species be at odds with small-animal colleagues?

Will equine veterinarians split among themselves and their small-animal colleagues when they take sides for or against propositions that will raise the age for horses in futurities and racing? Will society make mistakes by voting for a well-intended humanitarian change that causes a backlash?

More cruelty has befallen unwanted horses after the discontinuation of horse slaughter in the United States. This came about before better horse transport laws were considered.

Thousands of horses were mercilessly packed in double-deck trucks and driven without water, food or respite to Mexico and Canada for slaughter. Thousands more are being abandoned by people who can’t afford them and, unfortunately, many will starve.

Early on, the American Veterinary Medical Assn. and the American Assn. of Equine Practitioners were labeled too conservative and greedy when they took a stand against the ban on horse slaughter. But they understood that humane equine transport laws were not yet in place and they foresaw the horse abandonment crisis.

You will vote for Prop. 2 if you believe in humane treatment of animals, including not force-feeding geese to create pate de foie gras or not starving egg-laying hens for two weeks to increase egg production, and if you find that the methods used in modern food production have lost the stewardship role between man and animals.

You will vote against Prop. 2 if you are vested in the technology of intense factory farming that has created today’s amazing food production.

If you are unaware of the issues, raising a family and earning your money the hard way, your main concern might be the bottom line. You might agree with the CVA opponents of Prop. 2 who say food safety and availability is at risk, and you might vote against Prop 2 to keep down the cost of eggs.

But the price of eggs has nothing to do with the ethics of humane treatment of egg-laying hens. Either we are a humane society or we are not.

That is the issue at the heart of Prop. 2.

The science for avian safety and disease control will catch up with the new housing systems mandated by the proposition if it passes.

In November, California voters will say “yes” or “no” on Prop. 2 and make a statement to the world. When issues like this come to your state, how will you vote?