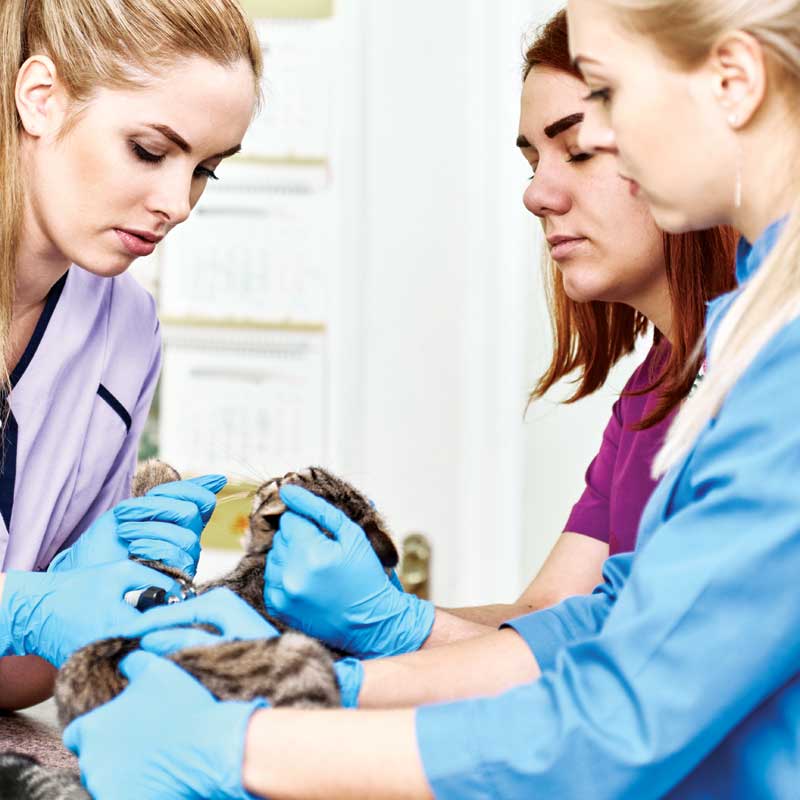 It’s been 32 years since there was a 50-50 ratio of women to men entering the veterinary profession. Veterinary schools now report that more than 80 percent of their enrollees are female, and the percentage of women in the veterinary workforce tops 55 percent.

Why then, does this profession need to turn to #timesup for inspiration or talk in terms of #metoos?

The answer should be obvious

Because women may make up a larger percentage of the veterinary workforce but they do not run this profession, as many industry watchers seem to think. Why …?

Because males overwhelmingly claim leadership roles in settings where our professionalism is judged and where professional standards are set. To wit, women account for an average of exactly 34 percent of the state veterinary board seats. Six states actually have no female veterinarians as members. (I painstakingly did the math.) Six out of 30 vet school deans are women. Our industry’s biggest corporations have only one or two female board members (VCA-Antech had none in 2015). And I don’t have to tell you what the AVMA leadership looks like.

Because it’s harder for women to access capital than men, making practice ownership and financial success that much more elusive for us. And, as everyone knows, practice ownership equals professional power in veterinary medicine (with respect to patients, clients, distributors, marketers, manufacturers, regulators, academia, government … ).

Because women in certain sectors of veterinary medicine still are blatantly treated as lesser-than and subjected to overt sexism, notoriously where food animals are concerned but also (perhaps especially) in equine medicine and in many specialty groups.

Because we’re still expected to have children but chastised for taking time off, working part-time, or electing to work in corporate settings with more flexible schedule opportunities (usually by those who most expect us to bear children and are least likely to offer that flexibility).

Because we’re blamed for pink-collaring the veterinary profession’s economy. This, in spite of the fact that the veterinary industry has done nothing but grow since women entered, in large part because women are willing to pay for veterinary services.

Because women are implicitly held responsible for the cultural threat we represent to the profession, yet many experts agree that it’s prospective male applicants who increasingly reject veterinary medicine precisely because they view a feminized profession as inferior to a more masculine one.

Because female veterinarians just exiting vet school were treated like wannabes when we were in the minority while now-minority male grads are regarded as covetable unicorns. (You know it’s true.)

Because most of us either struggle under the weight of our culture’s male-as-baseline paradigms or count ourselves as victims of masculine aggression. Which affects our success as veterinarians in more ways than I have room to address here.

The elephant in the profession

So at the risk of beating a dead horse (as far as some of you are concerned) let’s first address the elephantine issue that’s so ascendant in our popular culture: Sexual harassment. This time, let’s look at it from a veterinary viewpoint.

I, for one, have never had as much as an unwanted Y chromosome laid on me (outside of crowded nightclubs where gropers are maddeningly crafty), but I’ve experienced several full-frontal exposures, three gross-out masturbators (including one motorcyclist I unrepentantly ran off the road, outcome unknown), and countless aggressions in the workplace.

Among the veterinary workplace issues I include myriad unsolicited and unwanted advances, a trove of inappropriate questions, “jokes” and pranks, several instances of obvious gender-based marginalization, a stream of disparaging female-specific commentary, and a rampant disregard for many concerns that were explicitly deemed “too emotional” or “emotionally overblown.”

I’ve quit my job twice over blatant sexual harassment issues I could not prove (and did not report) and was actually “laid off” the day before my maternity leave began (thanks, VCA). I never received justice for these transgressions and would relish the opportunity to see any. But regrettably, I know better than to expect any, #metoo notwithstanding.

My experiences are not extraordinary. What is, however, is that many veterinarians I know still disbelieve. Not only do they suggest that victims “read into” these circumstances or exaggerate their severity, but they also accuse women of being attention-seeking revisionists for naming our aggressors so many years later. “They’re ‘taking advantage’ of the situation,” they say.

But, as psychologists explained during the second Cosby trial, to doubt one’s own perception of gender-based or sexually charged offenses is only human. It’s how harassers and predators get away with their behavior. What’s more, women have a lot to lose in the telling (respect, pride, opportunities, money).

Even presenting facts about gender bias has a way of eliciting similar responses. Women who complain are shut down or shamed. For example, in 2016 the AVMA’s leadership accused one of its critics as harboring a “chronic wound” related to a previous employment dispute after she accused the organization of not taking the gender wage gap seriously. In so doing they discredited her arguments as emotional. Which wouldn’t bear the same weight if they’d said it to a man. (In fact, they’d never say it to a man.)

These issues are not going to go away just because women are in the majority. In fact, if anything, the power gap is widening as male-dominated corporations increasingly run the show and a lower percentage of women own their own practices. Because this profession isn’t run by women—rather, it runs on women. We’re the workhorses of this profession, and as our younger population swells, that trend will accelerate.

What it really comes down to is fairness. And we won’t have any until we’re proportionally represented in all sectors of the industry. Which means we should run for office, apply for a seat on the board, buy into a practice with another woman, lean in …

But changing the power dynamic is just a start. To make a lasting change, those who enjoy privilege have to recognize it and change their point of view, too. In other words, men need to recognize that they and their male colleagues are in a position to improve the profession by empowering its entire workforce. Everyone wins when power is shared, each perspective included and every brain cell leveraged.

To wit, this column is not about chastising men. It’s about pointing out a dilemma we all face. It’s a problem we’ve all propagated to some extent, whether we’ve been defensive, angry, oppressive or predatory in our behavior. Maybe that’s the best message behind #metoo: Gender-based injustice isn’t just one gender’s purview. It’s a problem we all have to solve together. #Metoo indeed.

Dr. Patty Khuly owns a small animal practice in Miami and is a passionate blogger at drpattykhuly.com. Columnists’ opinions do not necessarily reflect those of Veterinary Practice News.