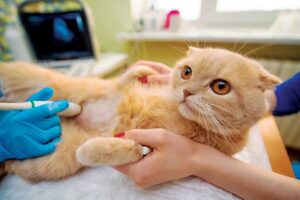 Don’t just send him an ultrasound image and think he’ll do business with you.

“I will not read ultrasound images unless I’ve taught the person through doing the ultrasound,” said Anthony J. Fischetti, DVM, MS, DACVR, department head of diagnostic imaging at the Animal Medical Center in New York, and president of Veterinary Ultrasound Society of the American College of Veterinary Radiologists (ACVR).

“If I’m just reading still images from someone I haven’t trained, I won’t read them. I won’t take their money, I won’t try to make a diagnosis, and I kind of wish my colleagues would do the same,” Dr. Fischetti said.

Why? There’s just too much to get wrong, he said.

“You can make so many things look abnormal with ultrasound if you don’t know the orientation of the probe or how the image was made,” Fischetti said.

In human medicine, often a relationship is already developed between those performing the ultrasound and the radiologist, so there’s a level of trust and comfort.

“We’re just not there with veterinary medicine yet, and I’m personally against most telemedicine ultrasound,” Fischetti said.

“It’s best to have a close relationship with a person who’s going to be interpreting the images,” Dr. Nelson said. “It’s helpful to have a lot of back and forth. It’s a lot of setting up of protocols.”

Relationships are important; it’s also a good idea the person at the receiving end of images has had a hand in the process early on, said Sharon Wagner, DVM, RDCS, an ultrasonography instructor at the University of Illinois College of Veterinary Medicine.

“Because ultrasound is an in-motion modality, it is ideal to have the person who will be interpreting either performing or reviewing the study prior to the scan being ended,” Dr. Wagner said. “Abdominal studies, heavy with cine loops and static images, can be sent to a teleradiologist. However, interpretation is still restricted in that adjustments to view something from a different window or slightly different angle cannot be made without putting the animal back on the table, which sometimes isn’t an option.

You May Also Like  Fire employees and hire stakeholders

“I have also found observing the patient and their behavior as I scan is a very useful tool,” she added.

Telemedicine is a great way to get feedback on a scan, said Tony Pease, DVM, MS, DACVR, chief veterinary medical officer of the WVC Oquendo Center.

“Remember the interpretation is only as good as the images you get, which is why getting good at scanning is the best way to help maximize the chance of a diagnosis,” Dr. Pease said.

Ask questions of the telemedicine group, learn how to make images better, and get lots of pictures of abnormalities to give the best chance for an expert to help with differential diagnoses, he added.

“Telemedicine is a great way to become a better sonographer, but you are the scanner, so the interpretation is based on the images you make, so keep training,” he said.