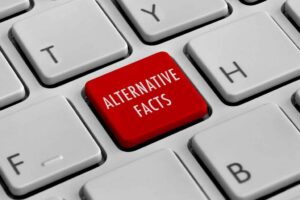 I used to think any individual’s predisposition to anti-intellectualism ended when they received a complex diagnosis or their child required emergency surgery. That’s when everyone can agree on one thing: We’re grateful for all that great science! When you or your family’s life is on the line, that’s where the rubber really meets the road. Right?

Not so fast, y’all. Enter COVID. A deadly pandemic hits the U.S. and we’re all still arguing over the relative merits and pitfalls of mask-wearing and whether as-yet unproven drugs should be indiscriminately administered anyway. It’s proof positive America has swallowed all the spoon-fed bull**** that passes for science in a world where party distinctions and religious beliefs seem to matter more than expertise.

“Experts” are apparently elitists who desire nothing but to wield their knowledge as political power and make others feel like crap for not having studied as much as they have. Even an overwhelming scientific consensus on any given issue draws mass scrutiny whenever it butts heads with the deeply entrenched convictions of a large, like-minded group of people.

It’s why wacko conspiracy theories flourish. When you have to unearth a rabbit hole to find an explanation that fits your preferred reality, really strange stuff creeps out of YouTube. And because millions of other people follow “Weirdo Idea’s” Facebook page (scientists, too!), you’re more comfortable believing in the truly bizarre and existing in your freaky DIY bubble than accepting the scientific facts you believe you know for sure cannot be true because they conflict with your preexisting perspective.

This hostility toward science also explains why the Environmental Protection Agency (EPA), for example, has drastically limited the scope of research it deems acceptable. It’s why the Centers for Disease Control and Prevention’s (CDC’s) funding has been slashed.

No data? No rules. And I guess that’s how some of us like it. But however you feel about government intervention and deregulation, it helps very few of us to ignore the temporarily inconvenient. Not if science is unified in predicting the planet will eventually end up on a ventilator, along with hundreds of thousands of U.S. COVID patients (bit.ly/31KqJaZ), at which point we will surely be arguing over our favorite color.

Ironically, this acceptance of “un-science” is happening despite the fact most of us carry the bulk of this planet’s available information on our person at all times. The facts are literally at our fingertips. Yet, the groundswell of support for the Orwellian concept of alternative facts means they’re likely to elude humanity more than ever before.

Veterinary medicine is not immune

We veterinarians attend rigorous, science-based programs not so we can join an elite scientific clique and snicker at the millions who can’t even grasp basic math. Nor do we devote our lives to a less financially rewarding path than we might’ve followed to justify the policies of those who would reap disproportionate earnings or amass power. We do so to advance animal welfare, feed the planet, and further human health (among other noble pursuits).

Yet, we, too, have been directly affected by the sidelining of science. Consider that veterinary education is increasingly less reliant on science than ever before (an argument I’ve advanced in past columns). Not only are our veterinary research institutions suffering from diminished government funding, private veterinary schools are also making inroads. This, despite a dearth of student access to clinician scientists or research facilities. If we follow this path, we’ll be trading an education in veterinary science for vocational veterinary training.

In this and other ways (largely fueled by corporate dollars), our profession has effectively accepted the politicization of science.

The hit to collegiality

What’s more, if the vitriol on some of the online veterinary forums is any guide, this politicization process appears to have magnified divisions in our ranks. Longstanding conflicts between veterinary factions (defined by age, income level, credentialing, ownership status, practice type, geography, religion, and other demographics) are more combative than collegial, now that they’ve become political, too.

For example, some of you, I’d wager, are already dismissing this column as the rantings of a staunch liberal Democrat. If so, you’d be wrong. I’m more than a Latin-American, small animal general practitioner living in a major metropolitan area. I’m also an MBA-carrying, first-generation Cuban-American practice owner whose parents fled authoritarian communism. My voting history might just surprise you.

You May Also Like  Loving animals: Our profession’s secret weapon or its Achilles heel?

My point is that the complexity of any one person’s system of beliefs is never as clear-cut as those who subsist on a steady diet of divisiveness would have us believe. When veterinarians cave to these alluring us-and-them oversimplifications, we grow as fat and lazy as those who disavow the elitism of science and intellectualism want us to be.

In any case, the purist in me believes science has no business in politics anyway. I mean, by definition, science doesn’t pick sides. Naïve though this may seem, I think we can all agree that in an ideal world we’d happily separate the two. Yet, we can only do so if we actually teach and practice veterinary science.

After all, veterinarians are still united by scientific principles. We’re educated to make clinical decisions based on the preponderance of evidence available, not on what’s expedient, easy, more profitable, or keeps us employed. We’ve all studied medical ethics, we understand the pitfalls, and we know what’s right and wrong––at least in our veterinary orbit.

We also know what it feels like to have veterinary evidence ignored. Whether we’re talking about woo-woo pet health products, indiscriminate drug usage, or inadvisable nutritional regimens, we have seen our clients ignore evidence on the basis of their online research findings or breeder’s recommendations. And we’re seldom silent when directly confronted with these issues.
How, then, is it okay for us to roll over for the muzzling of science, whether it’s within our profession or in public life?

One Health notwithstanding, veterinary medicine has never played an especially active role in promoting itself as a player in public health––or in science in general. While we carry the load in food safety, provide scholarship at all levels, and counsel clients on matters of public health, we shy away from publicly supporting science when it does not concern animals directly (and often, as has historically happened with respect to animal welfare, even when it does).

You May Also Like  Selective use of antimicrobials could reduce AMR

Indeed, any whiff of the controversial in veterinary medicine elicits a deafening silence… crickets. And yet, these need not be controversial issues. Whether it’s conservation science, animal welfare, or transmissible diseases, we collectively act as if we don’t deserve a voice in the debate or a seat at the table, thereby tacitly supporting the disavowal of science, which ultimately undermines the role of all scientists.

Regardless of whether you think our profession does enough, consider that we, as individuals, are capable of moving the needle. We are scientists. As such, we should play a more active role in advancing the cause of science, promoting public health, and supporting evidence-based policies whenever possible. What’s more, I’d argue, we also have a greater responsibility than the average citizen when it comes to challenging our preexisting beliefs, especially when they conflict with the overwhelming scientific consensus.

Patty Khuly, VMD, MBA, owns a small animal practice in Miami and is a passionate blogger at drpattykhuly.com. Columnists’ opinions do not necessarily reflect those of Veterinary Practice News.