Why heartworm prevention begins in your practice 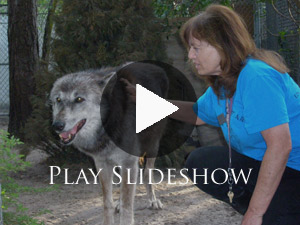 At 6:30 a.m., Nancy Smith wakes up to care for the unusual residents living in the 2-1/2-acre lot behind her Naples, Fla., home, which include 26 wolves and wolf dogs, two coyotes, eight prairie dogs, six sugar gliders, three Florida panthers, a black Asian leopard, a leopard-jaguar cross and four house cats.

Although Smith’s backyard is filled with lush greenery, these animals don’t exactly live in the wild. They’re a part of the Shy Wolf Sanctuary, Education and Experience Center, a nonprofit organization Smith founded in 2001 to provide a home for displaced animals.

She begins most days by chopping up fresh vegetables and also often prepares chicken and beef meals for the animals. Then, with the help of several volunteers, she makes her rounds to each animal’s unit, feeding them, giving them fresh water and—twice a week—cleaning out their living spaces with biodegradable cleaners. The biggest perk of this routine, she says, is getting to spend time with the animals, brushing them and taking them for walks.

“I’ve always liked dealing with any kind of animal,” Smith says. “I’m in awe of them–they’re just so special.”

In order to run this organization, she had to obtain an animal care permit from the U.S. Department of Agriculture as well as a kennel permit. Each wolf or wolf dog lives in an individual or shared unit surrounded by a 10-foot fence with trees, toys and room to roam around inside. The large cats all have roofs on their enclosures. Smith says her neighbors hardly notice the animals live there, mostly because the houses on either side of hers are empty. But she says she has never had any complaints about the occasional howling.

Her home was not always such a zoo. It began in 1993 with one animal, a three-legged black Asian leopard named Moondance, who was injured at a zoo Smith volunteered with for eight years. Although some of the animals at the Shy Wolf Sanctuary came from the wild, most were domesticated in houses or zoos that turned out to be unsafe environments.

“I begged [them] not to put her in a dangerous cage and [they] looked at me and said, ‘What do you know?’ and did it anyway,” Smith says, explaining how Moondance lost her leg. She said the experience taught her what to do—and what not to do—when caring for animals.

“One thing I learned is that the people who actually work with the animals are who you need to listen to,” she says. “I listen to the people who come here and volunteer. What they say is worth their weight in gold.”

Smith especially holds the advice of two animal experts in high esteem: Dena Baker, DVM, owner of the Mobile Pet Vet in Naples, Fla., and Randy Eisel, DVM, owner of Animalife Veterinary Center in Naples, Fla. She turns to them for regular veterinary checkups and vaccinations, but also in emergency situations, such as when Dr. Eisel performed surgery on a wolf named Samantha who had suffered an eye injury.

“She had actually been shot,” Dr. Eisel says. “We ended up having to remove the eye. Even with that missing eye, she’s been so easy to deal with. At first you kind of wonder, ‘How do I treat this wolf,’ but she’s got a really easygoing, great personality.” Dr. Eisel says he has given the wolves some of the same vaccination treatments, such as hepatitis and rabies shots, that he gives regular dogs because of their genetic similarities. But behaviorally, he says that wolves and dogs are very different and should be treated accordingly.

“You have to be on your guard as far as paying attention to what you’re seeing and how you perceive that animal and how that animal is perceiving you, whether it’s as a threat or as someone who is friendly,” he says. “Whether [it’s] a wolf or a Chihuahua, if [it] sees you as a buddy, then it’s going to be a friend. But if it sees you as a mean veterinarian with a thermometer, he’s going to respond in a way that he thinks is appropriate, whether that’s to hide, be terrified or to try [and] bite you. It’s one thing to be bitten by a Chihuahua and an entirely different thing to be bitten by a 100-pound wolf.”

Many of the common problems Eisel treats the wolves for, such as arthritis, are not typical problems seen in wild animals, he says. He attributes this to the fact that an injury in the wild often results in becoming a free meal ticket.

“[With] arthritis problems in the wild, these guys probably wouldn’t live beyond five years,” he says. “When they’re in captivity, a lot of the same dangers are removed from their lives.”

But some threats—such as animal abuse—still remain. Many owners have the misconception that wolves can be kept and treated like pet dogs, and they react poorly when the animal responds by acting out, jumping over a fence in the backyard or tearing up furniture.

Smith receives many calls from officials asking her to pick up mistreated animals.

She remembers an instance where she was contacted by the Brower County Animal Services about a 37-pound wolf they later named Faith that had been dragged underneath a car.

“When Dr. Baker came and checked her, she couldn’t believe that something could still be standing that was that thin,” Smith says.

“She had no hair on her legs, ears, right shoulder or right hip. She was skin and bones. Someone had picked her up in a park; they had dumped her.”

Although some of these animals have been hurt by humans, Baker says they know the difference between someone who is trying to help or harm them.

“I have been amazed that an animal that you are not able to handle on a normal basis will allow you to treat them when they are hurt and injured,” she says. “I believe that the animals sense your intentions when you are helping them. I approach them with respect and caution at the same time.”

With Smith’s affection and Baker’s medical attention, Faith has recovered and Smith has even used her as a teaching aide during tours at the Shy Wolf Sanctuary.

Every day of the week except Tuesdays and Thursdays, Smith hosts tours at 9 a.m. and 10:30 a.m. where participants are guided through the Shy Wolf Sanctuary to meet and learn about its inhabitants.

“I want to educate people to the fact that these animals have feelings just like we do,” Smith says. “Treat them with the same respect that you would another person. You introduce yourself to the animal, basically palm up, fingers down. You don’t enter their personal space without asking. That’s for any animal, child or person. You wouldn’t walk up and grab somebody without putting your hand out if you didn’t know them.”

Although there is no charge for these tours, donations are accepted to help pay for the animals’ food and veterinary bills throughout the year.

The response and support from the locals and visitors has been overwhelming, Smith says.

“I had more than 100 phone calls just in the past three days,” she says. “We sold [out] Easter week by the first of the year. Most of what we do comes from word of mouth.”

On any given day, Smith might work as late as 10 p.m. caring for the animals, scheduling tours or returning phone calls.

But it’s worth it in the end, she says: “When kids get [it] –the idea of giving someone else or something else the chance to be happy, to not be sick–they realize that treating kindness with kindness really is nice.”