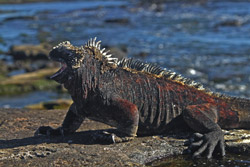 In a quest to be the first veterinary group to offer veterinary continuing education credit on every continent, the North American Veterinary Conference started “Expeditions” in February 2008.

The program’s motto is, “The destination is your classroom, and nature is your teacher.” The idea behind Expeditions is to help promote the One Health concept: Human Health – Animal Health – World Health.

The Expeditions program pairs veterinarians with veterinary experts, biologists and naturalists familiar with the animals and geography of the region. The RACE-approved CE programs cover the natural history and biology of the regions’ fauna and flora, as well as veterinary implications such as health and disease, both in the wild and captive situations.

For instance, on the most recent Expedition to the Amazon rainforest, the course was taught by me; Greg Lewbart, MS, VMD, Dipl. ACZM; and Carol Walton, DVM.

I have been working with exotics since my residency in primate and zoo animal medicine in 1986. Dr. Lewbart is an internationally acclaimed expert in fish, invertebrates and amphibians, and Dr. Walton has spent the last 20 years living, teaching and doing research in the Amazon rainforest (as well as summers in Antarctica and Africa).

There is no better way to learn about an animal than to study it in its natural environment. Even the best veterinarian will never know the abnormal unless she first learns the normal. You can’t get more normal than where they live.

On the first Expedition in 2008, 32 veterinarians traveled thousands of miles to Antarctica, the southern end of the world. They spent 15 days on a ship. Daily events included two to six hours of classroom lectures mixed with six to nine hours of field time, both on land and in inflatable boats. Either a veterinarian or biologist led each excursion.

All four species of seals and sea lions were seen, plus many whales, numerous penguin species and countless birds.

While it is illegal to approach or touch these unique animals, it was still possible to get a few feet from much of the wildlife we encountered. We spent hours studying he animals in their native environments. Since the sun rarely set and rose shortly thereafter, most days started around 5 a.m. In the Southern Hemisphere, February is summer, so the temperatures averages between 40 degrees F and 20 degrees F below zero.

The second Expedition went to the opposite pole – Churchill, Canada, just north of the Arctic Circle, to study polar bears. Lectures covered bear, polar bears, wolves and foxes, and medicine of arctic animals. The smaller group of 24 chartered their own Tundra buggy and hotel.

As part of the course, we participated in relocating two wayward polar bears. The animals were anesthetized and then loaded, using cargo nets, on a helicopter and moved north to uninhabited territory where they would not cause problems.

The trip to the Arctic was at the beginning of winter. The first night in Churchill brought 70 mph winds off the tundra, with outside temperatures below minus 40 degrees F. Fortunately, the Tundra Buggy was solid and comfortable, perfect and safe from the weather and the hungry bears. Over the course of three days on the tundra, the group spotted more than 40 polar bears, including adults and cubs.

Travelers who attended both the Antarctica and the polar bear Expeditions joined an elite “NAVC Bipolar Club.”

The following summer the NAVC took 36 veterinarians to Darwin’s Galapagos Islands. Once again, the trip was led by me and Dr. Walton. This was Dr. Walton’s 49th trip to Darwin’s wonderland. The NAVC chartered its own ship and spent eight days island hopping, hiking and snorkeling by day, lectures each evening. Lectures covered water and shore birds, snakes, iguanas, tortoises, invertebrates, sea turtles, sharks and cetaceans.

In addition, as this trip occurred the month after the British Petroleum oil spill along the U.S. Gulf Coast, lectures also covered the effects of oil on the environment.

You May Also Like  RUSVM: Prepping a new generation of veterinarians

Lots of wonderful food filled in the gaps between the exploring and the lectures–with an occasional nap thrown in.

The Polar Bear Expedition C.E. course was so popular it was repeated the following winter. With the changes facing Earth, there is a genuine threat to these magnificent animals. It is clear that the ice, the substrate that these large mammals require in order to hunt and survive – is freezing later and later each year. There is talk that this Canadian population is at risk for depletion.

This past summer the NAVC Expeditions course traveled deep into the Amazon jungle. Quito, Ecuador, was the first stop. The next day we flew over the Andes to the river city of Coca on the Napo River, a major tributary of the Amazon. From there we embarked on a two-hour motorized canoe trip. This was followed by a 45 minute hike through a swamp, then finally, a short paddle across a beautiful lake.

By the time we arrived at the jungle lodge we were exhausted, but most of the travelers still had the energy to do a night hike. Insects, reptiles, amphibians and more greeted the group. A 5-foot-long caiman hunkered down under the dock when the canoe arrived.

Whether you were a birder or a herper, or just loved the rich life of the jungle, no one was disappointed.One of the hard-core birders in the group added over 100 new species to her life list. There is truly something amazing about seeing an animal in the wild that, hitherto, you have only seen across an examination table in your office. Flocks of Macaws, screaming howler monkeys, slithering anacondas and fist-sized tarantulas were abundant.

This coming fall the NAVC will be partnering with the Association of Avian Veterinarians for an Expeditions program – Macaws of Tambopata – deep in the Peruvian rainforest. This trip will be co-taught by Dr. Brian Speer, a noted avian expert, and Dr. Walton. This Expedition, which has sold out, is sure to be another amazing, life changing, practice changing, experience.

Future trips include “Alaska: The Inside Passage,” taught by Dr. Mike Murray and me. Dr. Murray is the head veterinarian for the Monterey Bay Aquarium in California and has worked in the Pacific Northwest, monitoring the long-term effects of the Exxon Valdez oil spill on the environment.

Once again, NAVC has chartered a private ship and will be embarking from Sitka, Alaska. The C.E. starts with a visit to the Sitka raptor center, then ends a week later in Petersburg. Activities will include inflatable boat tours, kayaking, swimming and hiking and, of course, whale watching and wildlife viewing. Evenings will feature lectures on the animals of the area, including the effects of man on the environment (using the Exxon Valdez oil spill as an example). This trip is scheduled for May 19-27.

Later in 2012, the Expeditions program will hold its first “hands on” program in “Expeditions: Florida Keys.” This class, taught by Dr. Geraldine Diethelm and me, will feature actual hands on veterinary interactions with alligators, large pythons, dolphins, sharks, sea turtles and fish. Handling, physical examinations, laboratory sample collection and ultrasound demonstrations will be performed.

Snorkeling and diving on the beautiful reefs of the Florida Keys are planned, as well as lectures on each of these species taught by the instructors and local experts. An expected highlight will be time aboard an actual working lobster boat, baiting and pulling traps. The final night will be capped off with a visit to the famous Sunset Festival in Mallory Square. The trip will be offered Aug. 11-19.

For more information click here or call Suzanne Savage at the NAVC office at 1-800-817-9928 or e-mail her at ssavage@NAVC.com

To get an idea what the most recent trip was like, check out the daily blog from deep within the rainforest.