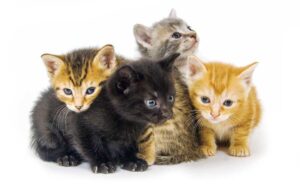 The loss of a kitten or multiple kittens within a litter is distressing, yet there isn’t a great deal of information documenting the causes of kitten mortality.  Unfortunately, neonates can decompensate rapidly and frequently die without diagnostics being performed. In fact, a questionnaire-based study collating data from 1,056 litters of 14 different pedigree breeds found 7.2 percent of all kittens were stillborn, and overall, the mean mortality between birth and eight weeks of age was 9.1 percent (Sparkes A.H. 2006).

Similar studies in non-pedigree cats have not been published, as it is generally presumed mortality rates are similar or lower. However, a postmortem study investigating the age and cause of death in 274 kittens demonstrated the mean age at death was younger in non-pedigree kittens than pedigree kittens (Cave T.A. 2002). The study also demonstrated that overall, 55 percent of kittens that died were identified with infectious disease, while congenital, traumatic, or nutritional abnormalities accounted for most of the remaining deaths.

When confronted with a sick kitten, it is useful to consider its age. Those who are stillborn or die in the perinatal period (<1 day) are generally found to have traumatic injury or suffered idiopathic death. As the kitten ages, the likelihood of it developing illness due to infectious disease increases (Table 1).

At birth, kittens have immature immune systems, receiving only approximately five percent of their required maternally derived antibody (MDA) transplacentally. Therefore, to gain protection from infectious disease, there must be transfer of MDA from the colostrum (Greco D.S. 2014). At the time of birthing, the queen begins to secrete colostrum, which the kittens must ingest in the immediate perinatal period. The ability of neonates to absorb MDA begins to decline from six hours after birth, and it is no longer possible after approximately 48 hours. The protective effect of systemically absorbed MDA usually begins to wane from three to four weeks of age (but may wane as early as two weeks in some instances) (Figure 1). However, the kittens’ natural immunity is still developing at this time, and since most vaccination regimes are not started until eight weeks of age, this can leave a period when they are particularly at risk.

Assessing kittens for signs of ill health can be challenging. As the cardiovascular system, nervous system, urinary, and GI tracts mature, there are marked changes in the “normal parameters.” Table 2 provides some normal parameters for kittens.

A kitten’s size can often limit the volume of blood that can be taken for diagnostic purposes and should be considered before tests are performed. If multiple blood draws are taken over a short period, anemia can develop. Blood volume can be calculated using the following formula: 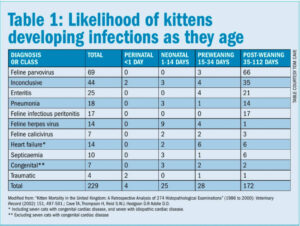 If 20 percent of blood volume is taken, circulatory shock ensues. Therefore, 10 percent is often considered the maximum that can be taken. However, since the bone marrow needs time to replace these cells—even once the issue of circulatory shock is dealt with—the cumulative effect of multiple blood draws also requires consideration. Therefore, the author advises keeping a log of the total blood taken on the kennel sheet and not exceeding 7.5 percent blood volume (BV) per week (which equates to approximately 4 ml/kg/wk). Tests should be prioritized to minimize the volume needed.

Blood can be drawn from the jugular vein using a 1- to 3-ml syringe and a 25- or 26-gauge needle. This should be aspirated very slowly to avoid venous collapse. A small volume (0.5 ml) of blood can be used for the most critical tests. Kittens can be positioned for blood draw from the jugular in the normal seated posture, or turned on their back and positioned on an assistant’s lap or table. If the kitten is active, the scruff reflex can be used to aid in restraint for either phlebotomy or catheter placement. Kittens younger than 12 weeks will have an intact scruff reflex. That is not to say cats should be picked up by their scruff, but rather gently pinching the back of the neck between a finger and thumb will elicit a docile (often floppy) reaction in the kitten, which can greatly aid intravenous access.

You May Also Like  The art and science of liver biopsies

Once blood has been obtained, it is important to consider which tests are most valuable and how to interpret them. At birth, the functional capacity of a kitten’s many organ systems is not fully developed. Therefore, it is particularly important to consider age-specific reference ranges. There are marked age-related variations in calcium, phosphorous, alkaline phosphatase (ALKP), creatinine, urea, and hematocrit, which should be taken into consideration. As the liver is not fully developed, glucose levels can rapidly deplete. Using a glucometer to assess glucose minimizes the amount of blood needed and can allow for frequent assessment. In addition, special consideration should be given to feline immunodeficiency virus (FIV) testing: kittens born to
FIV-infected or vaccinated queens may test seropositive as a result of passively acquired maternal antibodies. Retesting such kittens at 16 weeks allows MDA to
decline in the majority of cases, although occasional cats will remain positive until six months (Hosie M.J. 2009).

In certain cases, diagnostic imaging may be advised. However, there are age-related variations in these modalities that should be considered when interpreting images.

Abdominal radiography may be useful in some cases; however, the lack of intraabdominal fat limits the ability to visualize intestinal detail, and therefore, can be suboptimal. Thoracic radiography in young animals may demonstrate right-sided cardiac enlargement due to the increased capacity of the heart in utero. At birth, the right side of the heart is proportionately larger than the left. This can lead to apparent right-sided enlargement in neonates. It has been demonstrated cats of three months have a heart appearing larger and rounder, and that the vertebral heart score (VHS) is increased, remaining so at six months, but gradually decreasing between nine and 12 months of age (Gaschen, Lang et al. 1999).

Ultrasonography: While the paucity of intraabdominal fat in pediatric patients results in less detail on abdominal radiography, it improves ultrasonographic imaging. The general appearance of most organs should be similar to that of an adult, and prominent lymph nodes are commonly reported (Baker and Davidson 2006), as is a small volume of intraabdominal, anechoic free fluid (Stander, Wagner et al. 2010, Boysen and Lisciandro 2013). 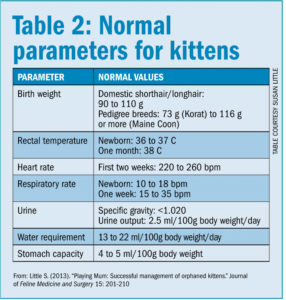 Investigation may reveal an underlying disease process necessitating specific treatment. However, many cases also require non-specific therapy to stabilize volume, as well as manage hypothermia and hypoglycemia, all of which can develop rapidly and destabilize the pediatric patient.

Fluid therapy: Kittens do not develop the ability to concentrate their urine until approximately 10 weeks of age (Little S. 2011). Therefore, if they are losing fluid (i.e. vomiting or diarrhea) or have decreased fluid intake, they are prone to the development of hypovolemia. Unfortunately, this can be hard to assess, as the skin contains more water and a skin tent does not develop until the kitten is markedly dehydrated (Macintire D.K. 1999). Further, the sympathetic nervous system is not fully mature until approximately eight weeks of age and, therefore, young kittens cannot respond to hypovolemia in the same way as an adult (i.e. the heart rate will not increase) (Little S. 2011).

Gaining IV access can be problematic. If access is not possible, intraosseous cannulation is as effective. This can be achieved by placing an 18- to 25-gauge hypodermic needle into the proximal humerus or femur. Ideally, this should be removed after two hours, when adequate fluid has been given to allow an IV to be placed. In certain instances, they can remain in place for up to 24 hours, although this can hinder turning of an obtunded patient (Davidson A.P. 2014).

The volume of fluid required to rehydrate is higher than what is required for an adult cat. There are several reasons for this. First, kittens’ bodies contain a larger percentage of water. They also have less body fat and a higher metabolic rate. As such, they require more water. However, the skin is more permeable to fluid and kittens have a high surface area-to-volume ratio, all-in-all, increasing the maintenance requirement for a neonate. The recommended daily fluid requirement for a young kitten is 80 to 100 ml/kg/day, with further adjustments added for ongoing losses (i.e. vomiting or diarrhea) (Little S. 2011, Little S. 2013).

Nutrition: Kittens with vomiting, diarrhea, sepsis, hypothermia, or inadequate nutritional intake are at risk of developing hypoglycemia. This can occur rapidly, as kittens do not have mature hepatic function and rapidly deplete their glycogen stores (Macintire D.K. 1999). Hypoglycemic kittens become weak and lethargic, which can lead to anorexia and hypothermia. If a kitten has developed hypothermia, this should be addressed prior to providing oral nutrition, as ileus or delayed GI motility are frequently encountered in hypothermic kittens. As a result, there is a high risk of regurgitation and with this, aspiration pneumonia (the gag reflex is not present until approximately 10 days postpartum).

Clinical hypoglycemia develops when blood glucose drops below 3 mmol/l; depression progresses to collapse, coma, and ultimately death. Therefore, it is important adequate nutrition is provided. How this is achieved depends on the kitten’s age.

Preweaning: In a young kitten that is hypoglycemic, but not hypothermic or dehydrated, a stomach tube can be placed easily, as the gag reflex is not present in kittens younger than 10 days. With the kitten in sternal recumbency and the head elevated, a lubricated, soft 5 to 8 French tube (premeasured from the nose to the last rib) can be passed gently down the left side of the mouth into the esophagus (Little S. 2011, Little S. 2013). This can then be used to periodically administer five to 10 percent dextrose orally at 0.25 to 0.50 ml/100 g body weight until the kitten is stronger. Oral administration is continued until the kitten is normoglycemic (Macintire D.K. 1999). The tube should be occluded prior to withdrawal to ensure the stomach content isn’t aspirated.

If oral feeding can be tolerated, meal size should be limited to about 4 to 5 ml/100 g body weight, as this is the maximum stomach capacity for a kitten (Macintire D.K. 1999). Food should be introduced gradually to avoid refeeding syndrome. Overall, the daily metabolisable energy (ME) requirement for kittens in the first four weeks of life is approximately 24 kcal ME/100 g body weight (Little S. 2013). The energy content of the queen’s milk varies between 0.85 to 1.6 kcal ME/ml, while milk replacers range from about 0.79 to 1.1 kcal ME/ml. If feeding milk replacer, warm it to 35 to 38 C by immersing it in a warm water bath prior to feeding.

You May Also Like  Kitten classes: The cat’s meow 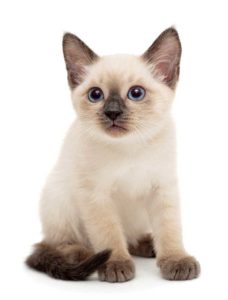 In summary, assessing kittens for signs of ill health can be challenging. Their immature cardiovascular system, nervous system, urinary, and GI tracts lead to marked changes in the “normal parameters” and present a diagnostic challenge to the veterinarian. Further, the immaturity of these systems impairs the kitten’s ability to maintain normal volume, temperature, and glucose metabolism. In many scenarios, therefore, non-specific treatments are required to help support the sick kitten.

Kerry Rolph, BVM&S, CertVC, FANZCVSc, PhD, ECVIM-CA, MRCVS, RCVS, specialist in feline medicine, is an associate professor of small animal internal medicine at Ross University School of Veterinary Medicine (RUSVM). She graduated from Edinburgh University and worked in small animal practice for two years before returning to Edinburgh to study for her PhD. Dr. Rolph gained both her certificate in veterinary cardiology and PhD in 2004. In 2010, she passed the Feline Medicine Australian College of Veterinary Scientists Fellowship examinations. Four years later, Rolph gained her European diploma in companion animal medicine and became a European specialist in companion animal medicine. She then worked at a private referral hospital in Bristol, England, for three years before joining RUSVM in January 2019. Rolph can be contacted via email at KRolph@rossvet.edu.kn.

8 Little S. (2011). “Feline Pediatrics: How to Treat the Small and the Sick.” Compendium: Continuing Education for Veterinarians Sept: E1-E6.