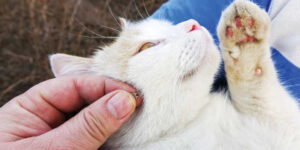 In recent decades, notable changes in the distribution and abundance of tick populations have occurred across North America. The blacklegged tick (Ixodes scapularis) continues to expand its range in the Midwest and eastern North America, with ongoing spread detected in many areas of southern Canada.1,2 The lone star tick (Amblyomma americanum) has crept northward and is now found widely across the central and eastern United States.2 And let’s not forgot about the longhorned tick (Haemaphysalis longicornis), which appeared recently in the United States and has already been reported in at least nine states.3

With these ongoing changes in tick populations, veterinarians regularly assess the potential impact on the health of our canine patients. And so they should—dogs are at high risk of tick infestation and subsequent transmission of several tick-borne pathogens. However, our feline patients share this high risk, as well. When it comes to cats, ticks are inherently feline-friendly.

As cats are excellent groomers, veterinarians and pet owners commonly assume ticks are quickly removed and pose minimal risk. Moreover, for cats that spend most of their time indoors, tick exposure is widely thought to be non-existent. A growing body of evidence dispels these assumptions and makes us think more critically about the risk ticks pose to cats.4-7

A handful of studies have examined tick infestations on cats in the United States, either using feral populations or client-owned cats.4-7 Feral cats provide a good indication of the natural exposure risk, since these animals are unlikely to be treated regularly with any parasiticides,6 while client-owned animals reflect risk based on common lifestyle habits and preventive care.

Tick species and activity have been shown to vary geographically and temporally. Knowledge of these fluctuations can be used for risk assessment for tick infestation for the cats in your practice.

Lone star ticks, blacklegged ticks, and American dog ticks (Dermacentor variabilis) are the predominant species found on cats. Geographic differences exist, with the blacklegged tick routinely identified from the Northeast7 and the lone star tick commonly seen on cats in the south central United States.4-7 American dog ticks are found on cats across the United States, albeit in lower numbers than the other species.5-7 All life stages of ticks—larvae, nymphs, and adults—are removed from cats, with immature life stages encompassing half of the samples in one study.6

Seasonal variations were evident, with patterns coinciding with the known seasonal activity patterns of each tick species.6,7 Peak numbers of adult American dog and lone star ticks, as well as nymphal blacklegged ticks, were observed most often in the spring (May and June). Adult blacklegged ticks predominated in October and November.

The most recent survey by the author (Little) and team also documented clear attachment site preferences for each tick species.7 Additional attention can be paid to these areas during a tick check, especially if the cat is amenable to only a brief examination. The dorsal head and neck were the most common locations to find blacklegged ticks, while the abdomen and perianal area were the typical sites for lone star ticks, and the back and ears were common places to find American dog ticks.

For cats in Canada, there is a paucity of information, although we can gather some insight from tick submissions to the Pet Tick Tracker.8 This is a voluntary citizen science tool that accepts reports of tick bites from owners and veterinarians across Canada. In 2017, submissions from cats were predominantly blacklegged ticks, with American dog ticks also reported, though in lower numbers. Similar patterns have been noted in 2018.

We also can extrapolate some of the findings from American surveys. Cats are at highest risk of tick bites in the areas where tick species are established, most notably, forested areas of southern Manitoba, Ontario, Quebec, Nova Scotia, and New Brunswick for the blacklegged tick, and grassy and brushy habitats across southeastern Canada for the American dog tick.9 Similar seasonal fluctuations of each life stage have been documented, indicating periods of higher risk.9,10 Lone star ticks are not yet known to be established in Canada, but adventitious ticks are regularly introduced, and therefore, this species still poses some risk, albeit low, for tick bites.11

Several tick-borne pathogens can cause disease in cats. Cytauxzoonosis and feline anaplasmosis are well-documented, while less is known regarding feline ehrlichiosis and borreliosis.

Cytauxzoonosis, caused by Cytauxzoon felis and transmitted by both the American dog tick and lone star tick, is a potentially fatal disease characterized by fever, anorexia, jaundice, and enlarged lymph nodes, spleen, and liver. It was previously thought bobcats were the only competent reservoirs, but evidence now supports that chronically infected domestic cats may also act as such.12,13 In endemic areas of the United States, prevalence by polymerase chain reaction (PCR) detecting active infection was as high as 15 per cent in healthy cats.13 In Canada, risk of local transmission is considered minimal due to lower bobcat populations and lack of established lone star populations. No data exists to estimate the risk posed by adventitious lone star ticks.

Fever, anorexia, and lethargy are commonly reported with feline infection with Anaplasma phagocytophilum. Seroprevalence can be high (up to 30 per cent) in areas of the United States with established blacklegged tick populations, although the true burden of disease is unknown.14 In Canada, seroprevalence values are much lower in dogs.15 We do not have data to reflect exposure to cats, but it is thought the seroprevalence is low, given the low infection prevalence in the blacklegged tick population.16

Seroconversion of cats due to exposure to Borrelia burgdorferi, Ehrlichia canis, and other Ehrlichia spp., has been documented in several studies. Similar to
A. phagocytophilum, seroprevalence of B. burgdorferi can be high (>45 per cent) in areas with established blacklegged tick populations,14 and recent work suggests these infections can lead to clinical disease in cats.17 The brown dog tick (Rhipicephalus sanguineus), which transmits E. canis, is not routinely found on cats in North America.6,7 High levels of exposure to E. canis have been seen in Spain, but not the United States.18 The clinical entities of these diseases in cats is not well understood and is an area requiring additional research.

Despite the limited understanding of many tick-borne diseases in cats, having tick-borne disease as a differential diagnosis for any cat presenting with vague clinical signs is encouraged, especially for cats with a history of past tick exposure or those residing in an area with known tick populations.

Just as with our canine patients, regular tick prevention should be strongly considered for our feline patients, even if they predominately reside indoors. Not only will tick control reduce the disease risk posed by these vector species to cats, but it also will protect against inadvertent tick exposure from cats to the people and other animals living in close association with them.7

The Companion Animal Parasite Council (CAPC) recommends year-round prevention for all cats, regardless of lifestyle.19 At the time of this article’s writing, the Canadian Parasitology Expert Panel (CPEP) was expected to have released new recommendations by the end of 2018 to provide specific guidance to Canadian practitioners.

A resounding theme throughout this discussion of ticks and cats is that we still do not have enough data to fully understand the risks. As practitioners, there are ways you can contribute the valuable data you harness on a daily basis to help us understand risk of ticks more broadly. As mentioned previously, the Pet Tick Tracker in Canada accepts submissions of ticks (photos or actual samples) from across the country.9 In the United States, there is the program called ‘Show Us Your Ticks’ (ShowUsYourTicks.org).20 Together, the data generated from these tools can help veterinarians lead the way in fostering a deeper understanding of tick risks on companion animals, including cats. They also are a great starting point for additional research initiatives in this area.

Katie M. Clow, DVM, PhD, is a postdoctoral fellow at Ontario Veterinary College (OVC), University of Guelph. Her research focuses on the ecology and epidemiology of tick-borne zoonoses, and she is an advocate for holistic, One Health approaches to research. Dr. Clow is also chair of the board of directors for Veterinarians Without Borders Canada. She can be reached at kclow@uoguelph.ca or through her website katieclow.com.

Susan E. Little, DVM, PhD, DACVM (parasitology) is regents professor and Krull-Ewing professor in veterinary parasitology at the Center for Veterinary Health Science, Oklahoma State University. Her research focuses on the natural history of vector-borne disease agents, with a particular focus on ticks and tick-borne infections. Dr. Little is co-director of the National Center for Veterinary Parasitology (NCVP) and past-president of both the American Association of Veterinary Parasitologists (AAVP) and the Companion Animal Parasite Council (CAPC). She can be reached at susan.little@okstate.edu.