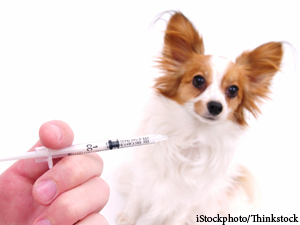 Before the American Animal Hospital Association published the first canine vaccine guidelines in 2003, veterinarians had only manufacturers’ recommendations for guidance. This posed a problem when veterinarians grew increasingly concerned with over-vaccination and a link between certain vaccines and sarcoma development in cats became apparent.

Experts and academics have collaborated on the topic three times since the release of the initial canine vaccine guidelines, helping veterinarians create a rational vaccine program to include in their patient wellness protocols.

“Years ago, the profession was heavily marketed through the need for annual vaccinations,” says Robert Franklin, DVM, Dipl. ACVIM, of Oregon Veterinary Specialty Hospital in Beaverton, Ore. “Now we educate owners about the total wellness needs of their pets. Vaccines are an important preventive in a wellness program, but are just part of it.”

Without discussing specific brands, the AAHA guidelines cite the duration of immunity (DOI) of core vaccines. The task force deems these vaccines as highly effective, having a potency of five years to lifetime. However, the task force has agreed that core vaccines should be given every three years.

“Vaccines have a different DOI on each individual dog. The same vaccine could protect one dog for eight years and another for five,” Ford explains.

While vaccines used to be administered annually, new vaccine technology and perspectives have changed the traditional practice.

“I followed vaccine frequency figures through sales reps,” Dr. Ford says. “Approximately 40-50 percent of U.S. veterinarians are recommending three-year boosters. It’s safe to say booster administering is trending toward three-year intervals. This is in part because veterinarians are putting more emphasis on best medicine and doing the right things for the right reasons. Non-core vaccines might still need to be given annually.”

Ford says that in speaking with veterinary colleagues, he finds that they tend to hew closely to AAHA’s guidelines, making adjustments in areas labeled non-core by the task force.

You May Also Like  Cannabis products continue to rise in popularity, but is there proof they work?

“Veterinarians who practice in areas where certain diseases are more prevalent say they make associated vaccines part of their core vaccine list,” Ford says. “For example, Northeastern states have a higher incidence of tick-borne disease, so vets might use Lyme vaccines as a core vaccine instead of non-core, as AAHA’s guidelines indicate.”

While no  law mandates non-core vaccines, AAHA’s guidelines makes suggestions for determining when the vaccines are appropriate.

“Non-core vaccines have to be determined by the risk of the area the vet is in,” Dr. Franklin says. “Talk to the client and determine what the exposure risk is to the pet from the non-core organisms. Judgments should be made by the vet with the owner. The dog’s lifestyle plays a role, too.”

The task force investigated killed, modified and recombinant vaccines and determined all are highly effective. But other factors, including frequency of administration, need to be evaluated.

“The warning I’d give veterinarians is if they’ve chosen to give a vaccine intended for mucosal administration, make sure everyone with access to the product understand it cannot be given any other way,” Ford says.

Canine influenza and Crotalid vaccines are 2011 additions to the non-core vaccine list while the biggest changes to the revised guidelines were increased clarification and referencing. The document is science-based with little, if any, conjecture, says Michael Paul, DVM, the principal of MAGPIE Veterinary Consulting and former executive director of the Companion Animal Parasite Council.

Since the economy dipped in 2008, veterinarians have reported fewer visits by clients. In trying to save money, clients might order vaccines for their pets online or go to a vaccine-only clinic. Experts say this is a concern.

“The annual physical examination is one of the most important procedures we perform on pets and, in many cases, is of greater value to the pet owner than the vaccines administered,” Dr. Paul says.

You May Also Like  Veterinary chiropractic: A friend or foe to your patients?

“It is the one opportunity we have to take a thorough history, perform a complete examination, detect problems early and educate pet owners. We must make it clear that that is not just vaccinations but includes parasite prevention, nutritional and behavioral counseling and early disease detection.”

Franklin says the problem with vaccines-only appointments is that one year’s time a dog ages three to seven years in comparison to humans. Especially in dogs age 8 and up, disease can be missed.

While vaccine experts say vaccines give clients the most “bang for their buck” in healthcare, there’s no replacement for an exam and other supplemental care.

“It is important to keep in mind that vaccinating is a key part of preventive care for pets. It helps ensure they have protection from certain diseases,” says Lynne White-Shim, DVM, assistant director in the Scientific Activities Division of the Schaumburg, Ill.-based American Veterinary Medical Association.

“Not vaccinating pets leaves them susceptible to life-threatening and sometimes fatal diseases, so the old adage about an ounce of prevention being worth a pound of cure really holds true,” White-Shim continues. “Spending some money up front for vaccines based on the individual pet’s needs is an investment in the pet that would otherwise be at risk of catching–and needing sometimes costly medical treatment for–dangerous diseases. At the same time, it would not be recommended for a client to seek vaccines only for their dog, because the physical exam is so critical.”

In addition to need for a parallel emphasis on wellness and vaccines, owners and veterinarians who have had experience with pets/patients having adverse reactions after receiving vaccines are concerned with ways to prevent a second occurrence in existing patients–and reducing risk of reactions by all patients.

“Canine vaccines have literally saved millions of lives and the risk of a significant adverse reaction is minimal,” Ford says. “But sometimes a dog will have a problem and the veterinarian needs to find a way to mitigate risks in the future for that patient–or prevent a problem in the first place.

You May Also Like  Talking to pet owners about preventive care: A primer

Franklin says he prefers not to give a lot of vaccines at one time.

With multiple vaccines, “If a reaction occurs, we don’t know which vaccine caused it,” he notes. “The recommendation is to give vaccines in two separate visits. However, the owner must be part of the discussion–veterinarians must explain why multiple visits are needed.”

AAHA’s guidelines made a general recommendation for small-breed dogs.

“We want veterinarians to consider giving core and non-core vaccines two to four weeks apart,” Ford says. “There is limited data on this, but small breed dogs have a higher risk of an increased incidence of a vaccine reaction when given many vaccines in the same visit. Giving core and non-core vaccines separately minimizes risk. We define ‘small breed’ as a dog’s adult weight at less than 20 pounds. When veterinarians tell owners the separate visits are for safety reasons, clients are extremely compliant.”

Considering the potential of an adverse reaction in a patient is where the veterinary-client-patient relationship really plays a role, experts say.

“It comes down to benefit/risk for the individual pet as determined by the veterinarian and client working together,” White-Shim says. “Age itself is not an indication of health status.

“As far as breed being a factor, the AVMA believes the body of knowledge surrounding the genetic variability within individual breeds or species and possible vaccine-associated adverse reactions is increasing, but remains too inconclusive to make specific recommendations appropriate for all patients. This, again, underscores the importance of tailoring the plan based on the individual pet.”

Other specialists say separate visits for vaccines might not be necessary.

“[Separate visits] might be indicated if an animal is extremely frail or has a history of adverse reactions to a particular vaccine, but it adds to patient apprehension as well as owner expense. I think this recommendation is rarely of value,” Paul says.

AAHA’s canine vaccine guidelines focus strictly on the vaccine portion of veterinarians’ responsibilities, and the guidelines remain the most comprehensive guide available to veterinarians seeking the best current thinking in core and non-core vaccine administration.

“The AAHA canine vaccine guidelines provide a good guide for veterinarians and a comprehensive overview of vaccines that are currently available,” White-Shim says.

One thought on “Canine Vaccines: The Best Current Thinking”